"What Does My Antidepressant List Reveal About Drug Companies?"

In my search, I collected the following antidepressant list. But first, one has to ask, "why so many kinds?" It kind of gives you a clue as to what’s going on with the pharmaceutical companies. I believe it’s for the buck.

For instance, a friend recently shared how his doctor put him on 8 different kinds of antidepressants until he got better. This took 19 months of his life! He spent lots of money on the drugs (and to top it all off - lost wages because of lack of ability to work). So did the final antidepressant work? Or was it a combination of other things like therapy, emotional growth and exercise which he also did?

If you perused the medical journals, like I did, you'd be surprised to learn what actually works.

My antidepressant list gives you a clue that no drug is the final miracle. Which is why I did more research and put together the report, “6 Powerful Ingredients to Cure Your Depression”. After reading through the medical journals, I learned that, according to the medical journals, placebos worked better than any drug out there! Now, that was confusing! So, I began to learn the other ingredients that ACTUALLY works to cure depression.

(For more info on the natural ways to cure depression, enjoy our free report.)

So, anyway, here is the exhausting antidepressant drug list I compiled... (along with some helpful articles below.) 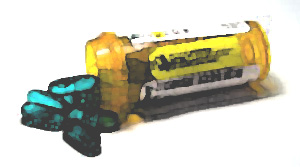 Potentially fatal reactions can occur with food products containing tyramine such as cheese and beer.

Tricyclics can be very lethal in an overdose and should be used with extreme caution in the elderly.

Unlike my friend who went through the 8 different drugs and 19 months of hell, I only went through one and 4 months of hell. (I won't get into why I think I came out the fastest with the least amount of scars - just read my report). It is my wish that you find the truth and the fastest route to peace and joy.

"6 Powerful Ingredients to Cure Your Depression"

Beware of Wellbutrin Side Effects

Beware of Paxil Side Effects

Got questions? Send us an email!

Back to "Do you need an anti depression drug?"